The Warm, The Cool and The Cat

Röda Sten Konsthall is pleased to present the seasons’ last exhibition in the 2016 Anthropocene series: The Warm, the Cool and the Cat by cross-disciplinary artist, researcher and scholar Pinar Yoldas. The exhibition is conceived and produced in conjunction with a three-week residency provided by Västra Götaland Region’s international artist in residency program AiR. During the exhibition Röda Sten Konsthall will also present an extensive talk and event program discussing various implications of Yoldas’ artistic practice and its positioning within the Anthropogenic discourse.

Investigating how today´s culture and society interact with biological and ecological systems, the exhibition seeks to draw thought-provoking parallels between phenomena such as techno-capitalism, science fiction, global warming, futuristic species… and hot yoga.

Pinar Yoldas’ practice can be described as an “innovative and experimental platform”, where she infuses her artistic, creative processes with various fields of scientific study. Drawing on her work as an academic researcher and scholar in biology, marine ecology and neuroscience -  her artistic practice methodically implements recent scientific research into the creations of ideas and visions for shaping new, imaginative futures.

For The Warm, the Cool and the Cat Yoldas has produced three new works, that together will take her audience on a physical and imaginary journey into a not-so far, yet radically changed future. The exhibition will address topics of global warming, capitalist consumerism and hypothesize mutated species of the Anthropocene.

In the spacious main space of Röda Sten Konsthall Yoldas will create a huge sign saying G-L-O-B-A-L -W-A-R-M-I-N-G made of infrared lamp heaters. The lettering will occasionally dissipate heat warming up the room, causing a public sweating experience for the visitors. Entitled Global Warming Hot Yoga Studio, the work is a theatrical and metaphorical representation of our present moment of incurable consumerism.

The second work titled Artificial Intelligence for Governance, the Kitty AI is a 3D animation of a cat, which speaks to the audience about herself and her job as the governor of a future city in year 2039. The kitty tells the story of how the effects of climate change have caused the city to change and enforced new ways of urban living.

The third work - New Species for the Anthropocene: The Young Organism - focuses on the speculative futures of the Anthropocene. In a laboratory-like display a series of futuristic baby species are presented in large underlit jars as if they were anthropological fossils of the future. The work is a critical response to all the presumed darkness our ecosystems are confronted with. It seeks to challenge our narrow assumptions about the origin of biological life while at the same time reminding us of the arbitrary values we place on plants and animals in relation to our cultural consumption.

Pinar Yoldas: The Warm, the Cool and the Cat is the third and last exhibition dedicated to Röda Sten Konsthall’s 2016 program addressing the concept of “Anthropocene”, following the international group show Surfacing Earth (Jun – Sep) and the solo-show Tides of Time by Finnish artist-duo IC-98 (Feb-Apr).

The exhibition is produced with support by SAHA Association

Pinar Yoldas (b. 1979, Turkey) is a cross-disciplinary artist/researcher based in Berlin and Durham, North Carolina. Her work develops within biological sciences and digital technologies through architectural installations, sculpture, sound, video and drawing with a focus on post-humanism, eco-nihilism, Anthropocene and feminist technoscience. Yoldas holds a Bachelors of Architecture from Middle East Technical University, a Master of Arts from Bilgi University, a Master of Science from Istanbul Technical University and a Master of Fine Arts from University of California, Los Angeles and a certificate in cognitive neuroscience. She is currently finishing her PhD in Media Arts and Science at the Center for Cognitive Neuroscience and Media Arts and Sciences, Duke University with the thesis “Speculative Biology: New directions in Art in the Age of the Anthropocene".

Photos of the exhibition 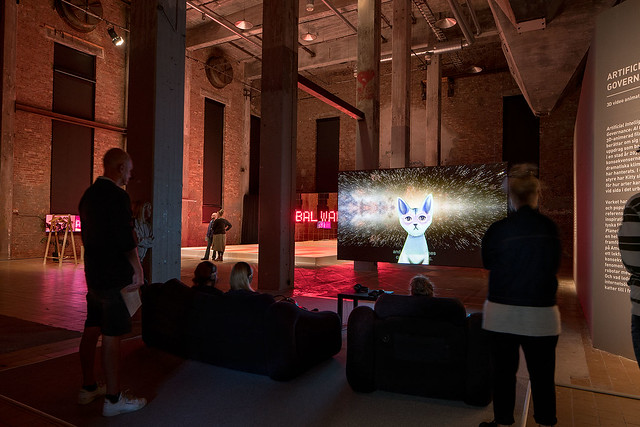